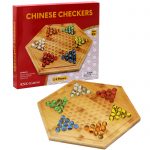 Object of the Game:
The object of Chinese Checkers is to be the first player to move all ten of your marbles across the game board and into the
opposite triangle.

Set Up:
Each player chooses 10 marbles of the same color. The players then place their marbles in their starting triangle, which is one of the six outside triangles on the board. 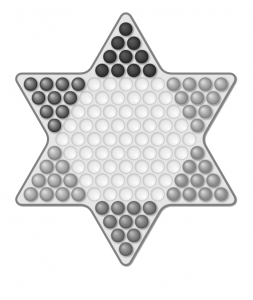 Game Play:
Choose a player to go first. Players take turns moving their marbles across the board. Players can only move one marble per turn.
The player may move their marble one space in any direction or make a jump move. Afterward, the player’s turn is over.
Players may jump any marble (including their own), or series of marbles, if there is an open space on the other side of each marble being jumped. A player may continue jumping as long as there are marbles to jump over.
It is possible on a turn for a player to move their marble from the starting triangle all the way across the board into the opposite triangle.
The first player to move all their marbles to the opposite triangle wins the game!

Rules:
A player may jump their marble into another player’s triangle but must jump out of the triangle before the turn is over.
If a player is blocking another from winning the game by not moving a marble from his starting triangle, the player can win by swapping his marble for the blocking marble when no other advancing move can be made.
No marble can ever be removed from the board.
Once a marble reaches the opposite triangle, it may only be moved within the triangle, but not out of the triangle.