Object:
Capture all your opponent’s checkers.

Set Up:
Each player begins with 12 checkers placed on every other dark square in the first three rows closest to them as shown below: 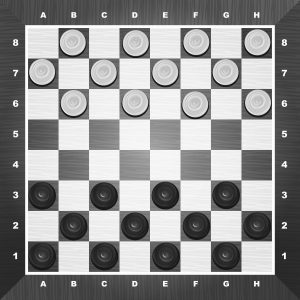 Game Play:
The player with the dark color checkers moves first, then players alternate turns.
Checkers always move diagonally. Single checkers can only move forward (towards the opponent). A checker can only move one square unless jumping.

Crowning
When a player’s checker reaches the opposite side of the board, it becomes a King. Place another checker on top of it. A King piece may move and jump forward or backward.

Winning:
A player wins when the opponent has no more checkers or can’t move.