Object:
To checkmate your opponent’s king.

Set Up:
Position the chess board so that the square in the right hand corner closest to each player is light (white). Each player sets up their first row with the Rooks in the corners, the Knights next, and then the Bishops. The middle two pieces are the King and the Queen. The White Queen sits on a light square, the Black Queen sits on a dark square. The Pawns are placed along the entire second row. 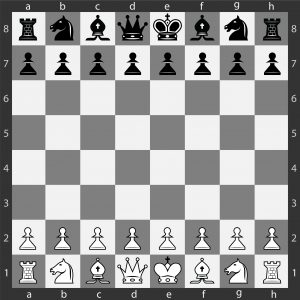 How the Chess Pieces Move:

King. The King is the most important piece. He can only move one square in any direction (horizontally, vertically, or diagonally) as long as he doesn’t put himself into check. Once a game, the King can make a special move called Castling.

Queen. The Queen is the most powerful piece. She can move any number of vacant squares in any direction (horizontally, vertically, or diagonally).

Bishop. A Bishop can move any number of vacant squares diagonally.

Knight. A Knight can move two squares horizontally or vertically and then one more square at a 90 degree angle, similar to an “L” shape. Knights are the only pieces that can move over other pieces in chess.

Rook. A Rook can move any number of vacant squares vertically or horizontally.

Pawn. A Pawn can move forward one square, except on the first turn where it has the option of moving forward either one or two squares.

Special Moves:
Promotion. If a Pawn reaches the opposite side of the board, it is promoted to another piece, usually a Queen. It can’t be promoted to a King or a Pawn.

En Passant may only occur when a Pawn lands next to their opponent’s Pawn after moving two squares on its first move. The opponent’s Pawn on their next turn only can take the moved Pawn en passant as if it had only moved one square.

Castling is the only time in chess when more than one piece moves during a turn.  During the castling, move the Rook to the space next to the King, and then move the King to the other side of the Rook.
Castling is allowed only if: