Object of the Game:
The object of Mexican Train is to be the player with the total lowest score at the end of the game.

Set Up:
Place the train hub in the middle of the table with the double 12 domino in the center. This domino serves as the “engine” for the round.
Shuffle the remaining dominoes face down. Each player draws the number of dominoes shown below, depending on the number of players:

Players arrange their drawn dominoes on edge with the pips (dots) facing the player but hidden from the other players.
The remaining face down dominoes are left aside in the “boneyard” for drawing during play.

Game Play:
To determine who plays first, each player draws a domino from the boneyard. The player with the highest pip count begins the game. Play continues clockwise.
A full game of Mexican Train will consist of 13 rounds, from double 12 down to double blank. The round ends once a player is out of dominoes, even if the last domino played is a double. Once the first round is finished, players will begin the second round with the double 11. The starting player for each round will rotate in a clockwise order.

First Turn:
On a player’s first turn, they will start to build their train, a single row of end matching dominoes starting from one of the eight train hub locations and moving towards the player.
The end of the domino placed in the hub must match the engine. For example, in the first round, players will need to start their train with a 12, since the engine is a double 12.
Players can play multiple dominoes on their first turn. The ends of each domino played must match. Here is an example of how the dominoes are placed to form the train:

Subsequent Turns:
After the first turn, players may only play one domino per turn, except for a double domino which is explained below.
Players may place a domino on their own train, the Mexican Train, or any other player’s train that is marked with a train token. If a player is unable to play, they must draw a domino from the boneyard. See boneyard rules above.

Scoring:
Players will count the total number of pips on their remaining dominoes and record their score. The goal is to have the lowest score. Once the scores for the round are recorded, players begin the next round. 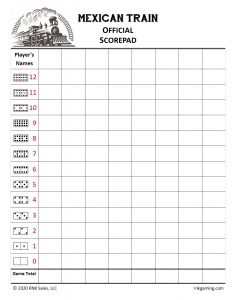